We've had an ironic turn of events here at Black and Yellow apparel since the start of 2018. It appears as though a certain giant entertainment company feels our Steel Skull mascot is a little too close to one of their iconic skull logos. They haven't deemed it "copyright infringement" but their lawyers are reviewing the matter and deciding if they want to make a case out of it. Learning this didn't really make me have faith in 2018 as a banner year. As I stated in my last blog, that skull is on every stitch of clothing we sell. It's on our stickers, our, size strips, our thank you cards, our mailerbags; literally everywhere we conduct business. To change it would be a major disruption and a giant headache. Before I continue, I know what you're wondering. "What company are you talking about and did you copy their skull?" I can't really reveal which skull and which company I'm referring to because I don't want to piss them off more than I probably already have but I will tell you, "No, I didn't copy the skull but I did use their skull as my "muse" or my inspiration for creating mine. Did I make mine a little too much like theirs? Possibly. I personally don't think so but other people apparently do. Either way I was faced with a conundrum. Do I press on with my skull and face any legal consequences that could arise from this large company or do I just start all over with a new skull?

I adopted a philosophy I learned about a while back that I'd like to share with all of you. It's called "TIISG." It's an acronym for "Turn It Into Something Good." It's a basic idea that when something bad happens, instead of crying about it like a bitch (which I've done plenty of in the past) you take destiny in your own hands and turn it into an opportunity to make something good out of it. In short, it's about looking at things as opportunities rather than roadblocks. I've gotten much better with this practice over the past few years. That's why I only bitched and moaned for a few hours before I stood up and thought, "Ya know what? Fuck them and fuck that skull. I'll make a brand new skull.  A better one. And the company will be better for it." I was not about to let this keep me down.  However, before I go any further, let me give our original skull mascot a proper send off. Edgar, just as Black and Yellow was starting to gain ground and people started to like you, you met an untimely demise. Good bye, Edgar. I'll always love you and respect what you did for the company. You made the ultimate sacrifice. Thanks, friend. 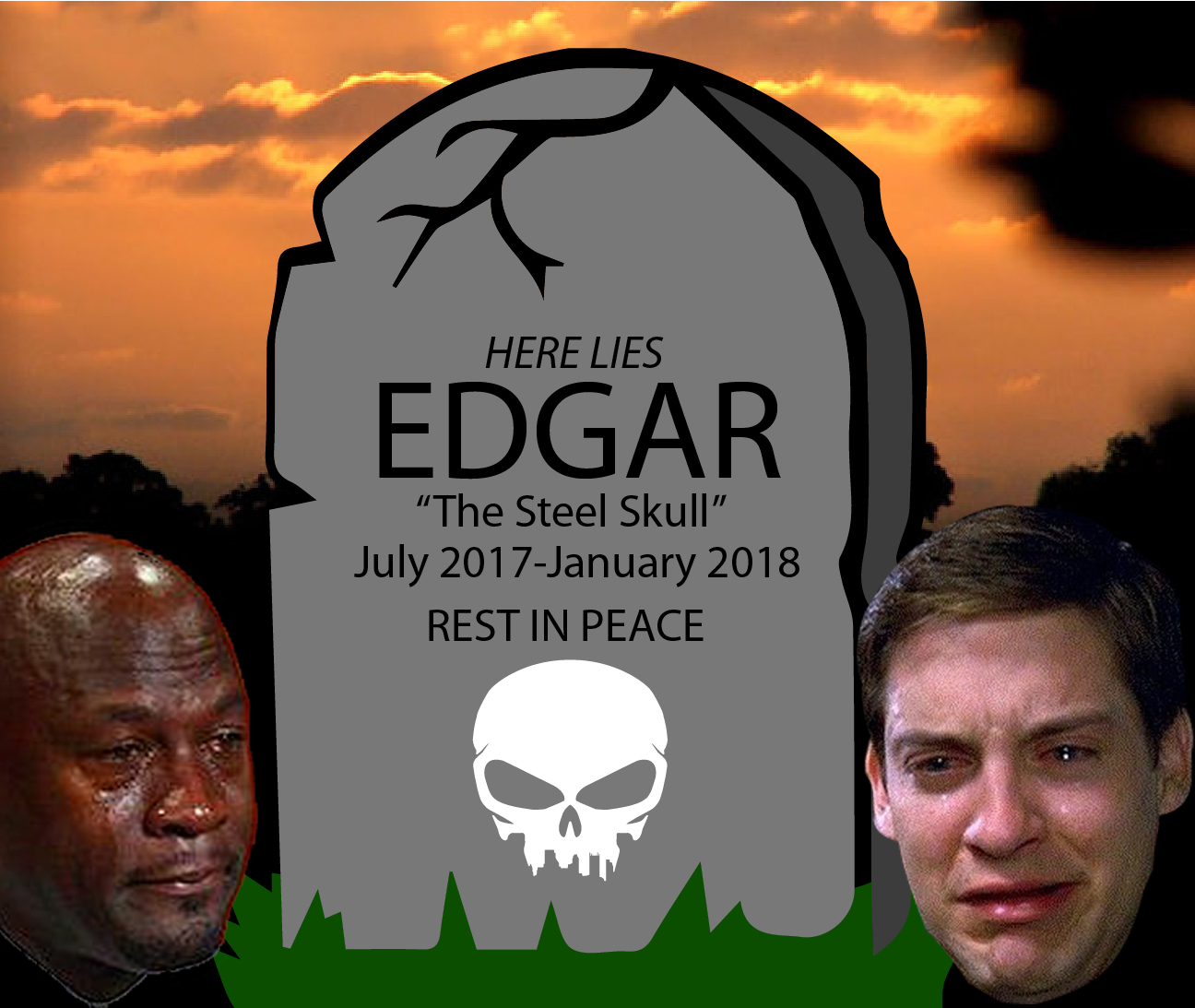 With all that morbid shit behind us, let's focus on the task of making a new and better Skull mascot. As I've previously stated, I wanted to take this shitty situation and turn it into an opportunity. An opportunity to take everything I didn't like about Edgar, and change it into exactly what I want to represent the original vision of the brand. Black and yellow apparel was meant to be "streetwear." Streetwear, at least to me, means part rock n roll, part skateboards, part city life and part aggression. Edgar was cool but he was little too Sporty. Which is exactly what I kind of wanted to avoid with all of our clothing. I wanted something that was bit dark and dangerous looking. As I said in my last blog, I came from a metal t-shirt background and I just can't escape my dark interests. With my only requirement being "the skyline in the mouth", I set out to redesign the face of our company. Before I would build a new mascot, I'd have to look at all my previous skull influences and dream up one all my own...again. Let me show you what I like...

First there's the skull from the misfits. A pioneering punk band in the late 70's early 80's. Everyone knows this skull even if they don't know where it came from. The Skull always had a look all it's own. Grinning and slightly evil looking, It was adapted from a 1940's horror film serial called "The Crimson Ghost." This will always be one of my favs. 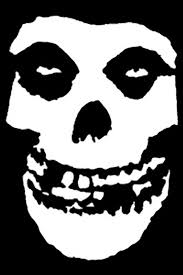 Keeping it in the family, the next bit of inspiration comes from Misfit's lead singer Glen Danzig's solo career. This horned skull is a more a metal icon then a punk one but it's damn near just as recognizable. I always loved the low light shading on this one. Definitely Cool. I also like the way it's kind of snarling. Vicious, indeed. 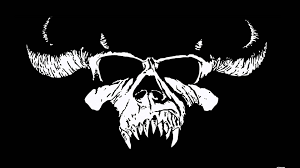 Next up is a clothing brand out of Japan called "Mastermind." To be perfectly honest, I don't really like their clothing but I really love their Skull. Straight and to the point. I admire its simplicity. Love the name Mastermind too. Good Job Japan! 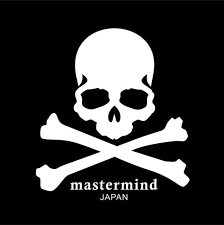 Last but not least, The Venture Brothers is a show I've never watched a single second of but I love their skull logo.  Great use of imagery in the mouth and nose. Well Done. I should check out that show one day. 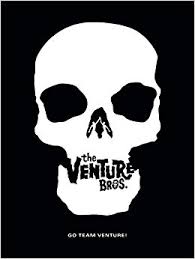 With my work cut out for me and my inspirations in the back of my mind, It was time to start production. Unlike last time, I realized if this skull was going to take more than a mouse and keyboard. I realize many artists can do amazing work with a mouse but I'm just not one of them. I was going to have to do this son of a bitch by hand. Thank god for the Apple Pencil and the iPad pro. With about 500 pictures of real skulls, skull icons, and skull clipart, I started drawing. As you probably realized by now, I like to name my skulls. Edgar was my first born. Over the past three weeks. I gave birth to Jack, Cliff, Damien, and Marty. I passed them around to everyone I knew and let people decide who they liked better. People seem to land on "Jack." Jack was a slightly more cartoonish looking skull. Stylized for sure but just not what I really wanted. After about 15 different sketches, I took one last shot at making the perfect skull for Black and Yellow. One I that I could re-launch all our skull based products on. I finally landed on a skull that is true to my original vision. One that can represent Pittsburgh nice and tight in the center of a shirt. Anyway, without further ado,scroll down to meet Victor. The new Steel Skull. 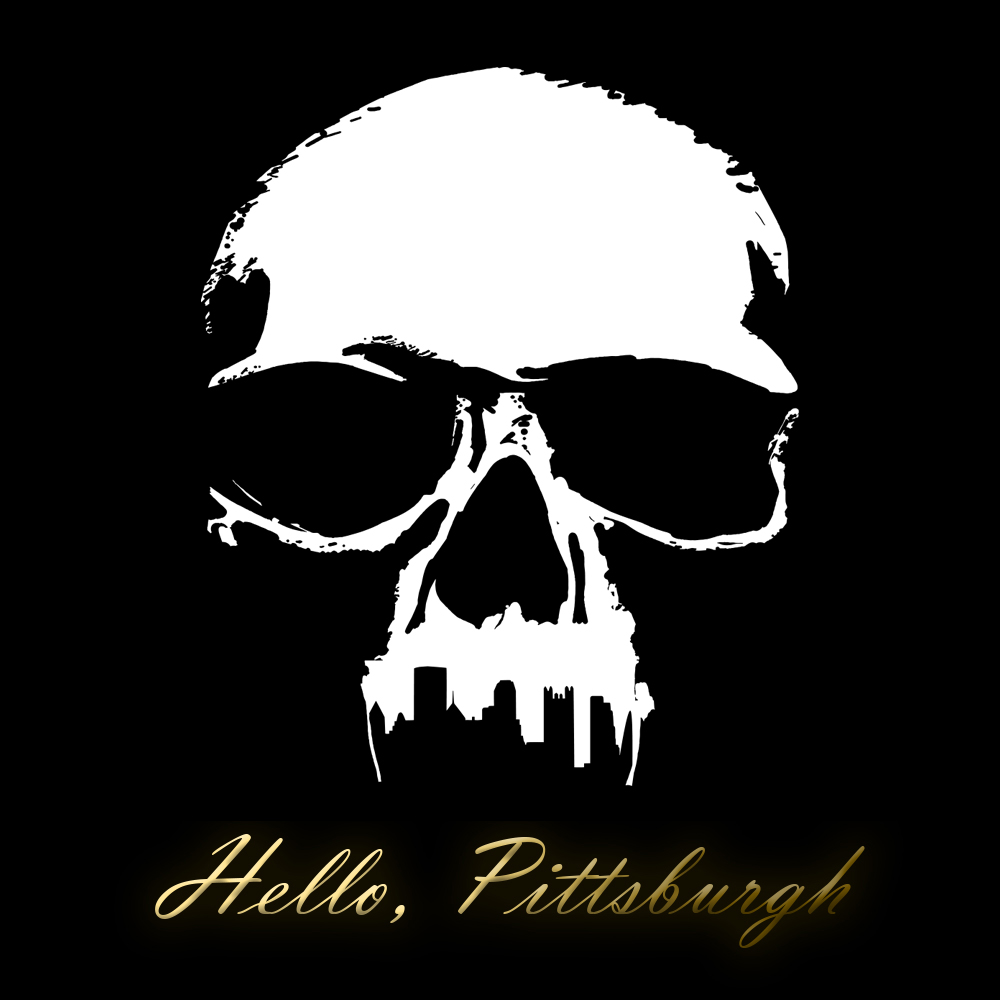 As  you can see, Victor here has everything that the dearly departed Edgar lacked, including a more well defined skyline. Theatrics aside, I hope you like our new company mascot and I appreciate your continued support in our brand. Thank you Pittsburgh! Look for Victor in our new garments from our Winter 2018 lineup. Available February!